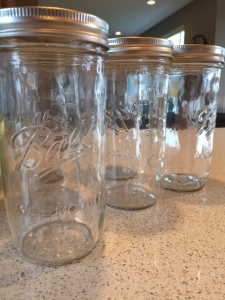 I grew up eating “Aunt Dianne’s Icicle Pickles” which my mother used to make and keep in the basement cold room. We actually called it a “fruit room”, where pickles and jams lined the shelves and cobwebs gleefully grew in the corners until every now and then we cleaned them all away.

I haven’t made icicle pickles since 2014 (I know, because I had labelled the jars and just gave away the last of them) because our pickle consumption in this house is actually fairly low. Dianne’s recipe is made in a large stone crock, which I have, and large stone crocks make lots of pickles. Say about 12-500 ml jars large, which is hard for a family of three to use up when frankly we just don’t eat a lot of pickles.

The only other time I’ve pickled something is when I made spicy green beans years ago and, oh, those were good. I think I’ve just made them once but I should make them again. I would probably eat more spicy green beans at this point than cucumber pickles, because I could pair them with spicy Bloody Caesars and garnish with a semi-dried landjaeger sausage or some other meaty delight. Or just eat them plain as a snack, straight out of the jar. I don’t foresee a new spicy bean batch lasting very long at any rate.

Although I had these two pickling experiences under my preserving belt neither of them were examples of ‘quick pickles’ – the focus of this month’s Food in Jars challenge. Quick pickles, sometimes called ‘refrigerator pickles’ – are pickles made and brined quickly, ready to eat quickly, and not ‘shelf stable’ – in other words, not able to be processed in a water bath canner and left on a room temperature shelf. Quick pickles are to be stored in the fridge and eaten more quickly – as fast as 4-6 weeks or perhaps even sooner.

I don’t know why I had asparagus on the brain for quick pickling. Maybe it was our late spring attempting to play tricks with my mind and hoping for local asparagus to be ready. Maybe it was because I just wanted to buy tall jars that I didn’t even know existed up until a few weeks ago. But regardless of the why, I got together with a friend last weekend and we did the how – we made quick pickled asparagus and quick pickled carrots together in her kitchen and walked away with three jars each of the small batches.

I’ve had a chance to try both the carrots and the asparagus and I’m liking the asparagus better so far. Here’s the recipe if you’re interested in trying it. Maybe as part of a smorgasbord meal like we had tonight. They didn’t stay as green as they are in the picture but they’re crisp and delicious. I’m sure they won’t last long!